21 July 2018, Saturday morning
A distance of 135 kilometres in north-westerly direction lies ahead when we leave our hotel in Thermisia. The rough wildness of the mountain landscape seems like a different  world after the tight embrace of the holiday resort. Our way leads us through picturesque villages snoozing in the intense heat. Well constructed roads become adventurous gravel tracks behind the next curve. They remind us not to forget the travel sickness pills next time. On both sides of the road high mountains again and again, in the distance glistening marble surface mining. 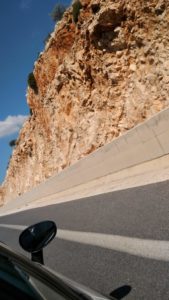 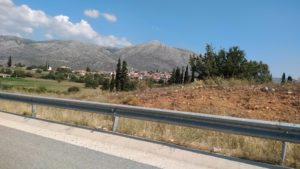 A short break at one of the numerous small fruit and vegetable stands where we try with hands and feet to find out the price for half a kilogram of fresh figs. Until the saleswoman gives it up, takes the offered money and additionally presents us with two big tomatoes. 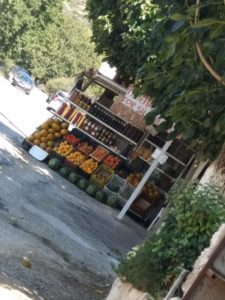 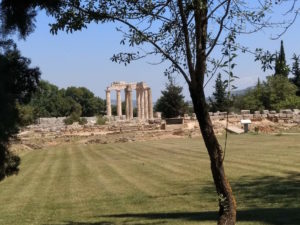 Two hours later a larger city: Nemea, where the pillars of the ancient temple of Zeus welcomes us impressively.

A short call to our friends – we’ll be there in half an hour.

They want to meet us at the village entry and take us to the house of Giannis’ mother to welcome us extensively. 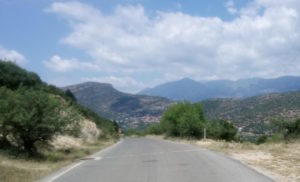 The moment has come. I’m standing on a mountain south of Psari and suddenly realize that this is the area my grandfather marched through 74 years ago with rifle and backpack, also in July. I had followed his steps in thought on the map during the last months so many times. Again and again I had envisioned the first personal contact with family Skourtis.
Now I’m feeling some kind of fear. 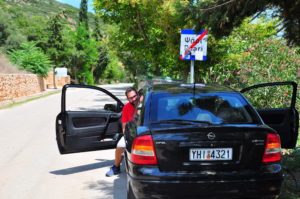 Giorgio, Giannis’ oldest son welcomes us at the entrance to Psari. Giorgio, a student at Piraeus University, had done the translation work of our correspondence for his father. He guides us to his grandmothers house, where the others are waiting for us in the shady courtyard. It is an illustrious society:
Giannis and his family, travelled from New York his childhood friend Elsa with her husband Bruce and her daughter Sophia. 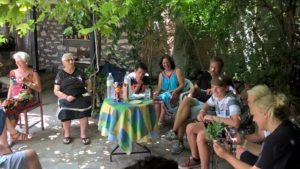 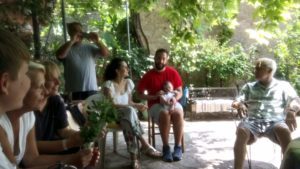 The atmosphere is relaxed and friendly. We talk about travelling, politics, Psari, and the planning for the next day. Afterwards a first common meal outside the village, followed by an extended coffee time. 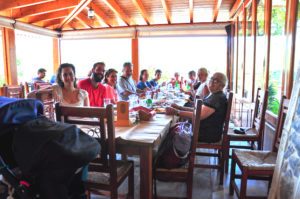 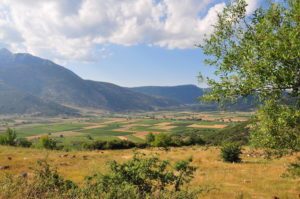 The rest of the day we visit the surrounding area while we enjoy the sometimes rough, sometimes charming character of the argolic landscape. It gets already dark when we get back to Psari. We let the day end in a phantastic mood in a tavern. 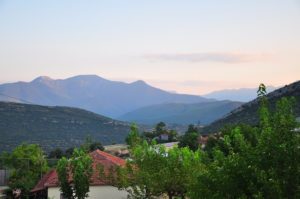 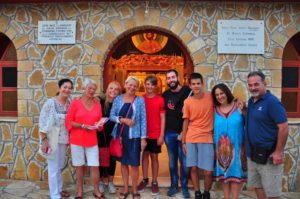 22 July 2018, Sunday morning
The beginning of a time travel back to the year 1944. Our first station is a large rock, the ‘Makri Lithari’. Behind this stone the 32 german soldiers hid from the partisans on the road below, among them my grandfather. It didn’t help – another ELAS unit came down  the mountainside, shot half of the soldiers and captured the remaining 16. 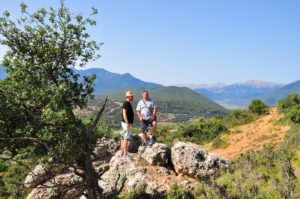 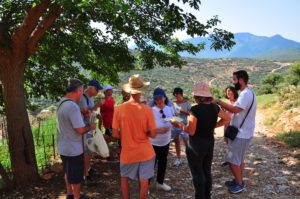 Giannis and I stand on the rock, looking around. I ask myself what the Germans could have wanted here. No location of strategic importance, no war essential resources. Just rocky landscape, meager grass, a few goats.

We’re on our way back to the road when the owner of the territory approaches us with fresh goat cheese and a bottle of the local grappa. Giannis explains to me that it is custom to serve the strangers when they cross the own land. Not for the first time I’m impressed by the greek hospitality.

Our next station is a little chapel at the opposing flank of the valley. Stony serpentine roads let us feel that a Fiat Punto is not a off-road vehicle.  A  worrying noise level from the cars underbody is drowned by the high-speed driven motor. I have to ask my family to leave the car at some inclines. It is reassuring that we are able to swerve at this speed when turtles are crossing. 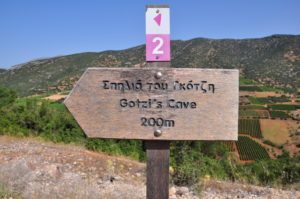 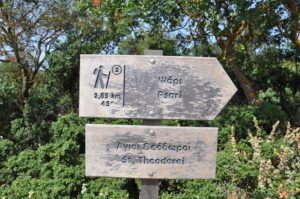 We reach the chapel several minutes after our companions. From here a pathway leads to a large cave in the mountain, the ‘Spilia tou Godzi’ (Gotzis cave).

To hide from following german troops the ELAS partisans went to this cave with their prisoners. They stayed for the night.

The place couldn’t have been chosen better. The cave is hardly visible from the valley. From the inside the viewer is able to control the whole landscape. It’s an incredible sight for me on that day, and I ask myself what my grandfather could have thought 74 years before when he saw this. Maybe he assumed this picture would be the last beautiful in his life. Or he felt new hope in light of this view. 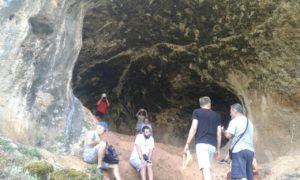 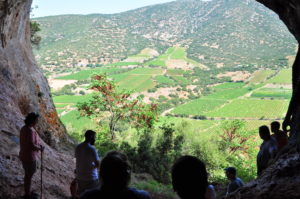 I catch myself secretly looking for traces from the past. Without success.

When we leave the cave Giannis holds me back. We look at each other and he hands me something. It’s a broad nail covered with rust. A nail like it was used to stud soldiers’ boots.

We walk back to the chapel. I feel depressed, sorrowing for the grandpa I’d never known. Giannis is also quiet in this moment. It seems to me I can read similar emotions in his face. But there’s no refusal, hostility or even hate noticeable. Neither by him nor by me.

The roads get better again when we reach the last point of our time travel. The family Gatsiopoulos lives far outside from Psari. As one of the last they sell their own cheese and yoghurt independent.

We’re on a covered terrace. On the wall of the house hangs a rusty ammunition chain. The caliber seems to be the one from a german machine gun.

Giannis introduces me to Mr. Gatsiopoulos, son of an ELAS member. We shake hands, he doesn’t look into my eyes but gazes down. What appears to me like aversion at the first moment is a deep shame, actually. Giannis explains to me that the inhabitants of Psari and the surrounding area are not willing to judge the Germans and their atrocities during the war. They’re rather ashamed of the brutal handling by the ELAS with their German prisoners.

I am stunned at this moment. At the beginning of the journey I had been prepared for a range between refusal and goodwill. Now this man stands in front of me and feels ashamed before a descendent of an invader. I want to embrace him, telling him that the guilt is on my nations side; but I’m not sure if this gesture would be adequate. So I carefully touch his shoulder, also lower my eyes, and hope he would interpret this as a gesture of reconciliation.

There’s a sinkhole amidst the surrounding fields (Katavothra in Greek) leading down to a subterranean river. The edges have been concreted in the 70s. Neighbouring is a small lake encircled by trees and high grass. An idyll. 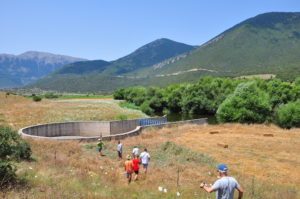 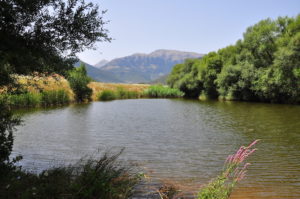 On 3 July 1994 the life of Paul Gerhard Wierschke ended here. The ELAS partisans pushed the 16 Wehrmacht soldiers down the sinkhole. In light of the depth there was no chance of survival.

We stand at the edge of the Katavothra. Mr. Gatsiopoulos quietly says something. Giannis translates into English: ‘Your grandfather is now looking at you from above and he’s happy not to be forgotten.’ 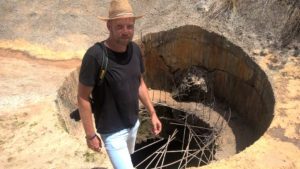 Giannis and I keep standing there for a while, arm in arm. Looking down the hole. We both have tears in our eyes. It is one of the most moving moments in my life.

We left Psari in the afternoon. Not before having thanked our hosts several times during the last dinner. All bills for the previous meals had been paid by our Greek friends – any contradiction had been pointless. This time we forestalled them and paid secretly during the dessert. When Giannis recognized this, he grinned and said: ‘This is the Greek way’.

I had rarely met such friendly, helpful and hospitable people like our new Greek friends. Their attitude towards us made a journey, begun against a very serious background and pervaded by a moral burden on both sides, to an unforgettable experience. Our friendship got stronger again during those days. Actually it is unnecesary to mention that we will get back to Psari as soon as possible. Or that the Greeks invade us for a change.

I’d like to fully recommend Psari as a destination for a short trip or a longer stay. The ‘Paths Of Culture – Psari’, an overwhelming landscape, courteous people, historic places are just some examples for this worthwhile destination. 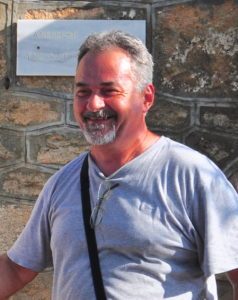 I’d also like to mention the tireless work Giannis is doing for his hometown such as the care for his excellent website psarikorinthias.gr, the construction of a wonderful chapel in the village, his work as the town’s chronicler, or his promotion of the local tourism. There is much more to enumerate what he’s doing on his own or in cooperation with Elsa Stamatopoulou.

I’d like to thank the whole family Skourtis, Elsa and Sophia Stamatopoulou as well as Bruce Robbins for his witty and smart company, helpful translating, and last but not least for his inimitable sense of humour.

This blog’s name is inspired by Elsa. When asked for my emotions regarding our encounter I could hardly describe. So she suggested the term of ‘Katharsis’ (cleansing). The term is defined as a mental cleaning at the end of terror and sorrow in the ancient Greek tragedy.